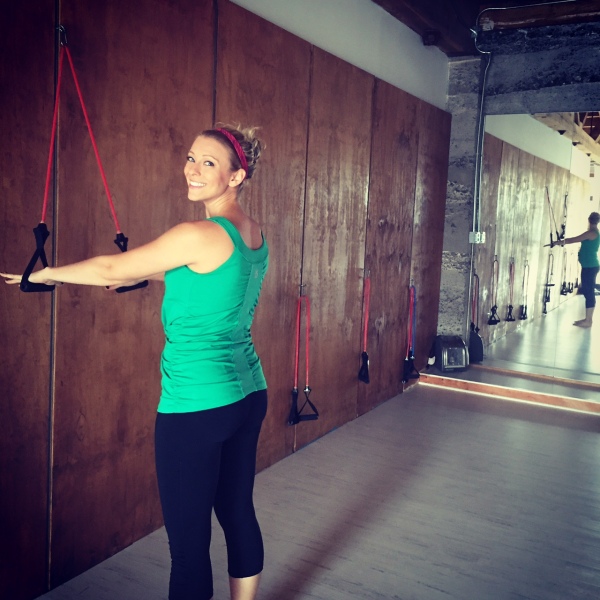 And just like that, this little wiggle-worm and I are starting the sixth month of pregnancy. Here’s where we’re at for the 24-week “bumpdate” for Baby H…

Month Six: Probably TMI, but here’s a fun fact: Apparently my uterus is now the size of a soccer ball and s/he is as big as an ear of corn, weighting about a pound and a half and measuring roughly a foot long if it were stretched out from head to toe. I’m pretty sure I’ve officially “popped,” although people don’t seem to feel quite comfortable/confident enough yet to ask if I’m pregnant…ha!

Weight Gained: Between 14-15 pounds, and my doctor says I’m right on track. She did issue one warning, though, that it’s a lot easier to pack it on in the second half of pregnancy, so I should be extra careful to not overindulge too much over the holidays (I won’t talk about Halloween’s candy-fest…oops). We don’t own a scale, so I don’t monitor my weight in between check-ups. Honestly, I thought I would feel the extra weight a lot more that I do, but I’m not sure if that’s because it comes on so gradually or if it’s just all the other bodily changes that are more distracting!

Workouts: I’m still keeping up my weekly cardio and cross-training sessions, as I’m trying to make the most of the energy I have while I have it. Of note this month, though, is that running is looking like it’ll be off the table for the immediate future. Following an incredible-feeling six-miler earlier this month with friends, I strained a round ligament on the left side of my groin and could barely walk. I’ve alternated rest and a few attempts at slow jogs since then, but frankly it’s becoming more trouble that it’s worth. My current plan is to give it a week or so of complete rest, and then my doctor said I could try doubling up on the support before making the final call to call it quits for the time being. It’s been an emotional process letting go of certain expectations, but I’m grateful for what I am still able to do, plus I’m taking the advice of this article to heart and keeping things in perspective.

Symptoms: Thanks to the bump making it’s official debut this month, it’s been all about the round ligament pain as my midsection stretches. Oh, and frequent bathroom breaks throughout the day.

Food Aversions: None. But my sense of smell is still super sensitive; I can’t stand the scents of cigarettes or any kind of alcohol on people’s breath.

Food Cravings: My sweet tooth has gone into overdrive, thanks to Halloween and the upcoming holidays. So I’m really trying to limit the treats and make sure I’m filling up on nutrient-dense foods and good fats first. Other than that, hot soups have been my jam now that Portland’s been cold and rainy for the past few weeks.

Sleep: I get up once or twice to hit the bathroom, but if I can MacGuyver a fort of pillows around myself each evening, I’ll usually stay relatively comfortable while dozing on my side.

Looking Forward To: The holidays! It’s always been my favorite time of year…and having our (very active) little jumping bean along for the ride is making 2015 even more special. What am I not looking forward to? The dreaded glucose test and a few shots at my next appointment. But you gotta do what you gotta do, right?

Boy/Girl Suspicions: Still no clue! But can’t wait to find out come March.

Any Fun Stories? Baby H’s movements (i.e. flips, kicks, flops and flutters) have become stronger, more frequent and even a bit more predictable. I can’t help but wonder if there are any early indication of his/her personality. Baby H always seems to be up right as I settle into bed, after my middle-of-the-night bathroom trip and again when my alarm goes off in the morning, so it seems like s/he doesn’t want to be missing out on anything!

Stay tuned for the month seven update in a few weeks…