To quote that infamous childhood book, “All living things eat, so everyone poops.”

True enough, especially if you’re a runner. And if that’s the case, there’s a good chance you know this all too well, having likely discussed it extensively with a handful of close runner friends.

While we like to think our workouts are accompanied solely by philosophical conversations, some inevitably spiral into war stories about bodily functions. But as prevalent as these intestinal issues (aka “Runner’s Trots“) may be, it’s a topic that’s not addressed in all circles.

So what’s a trot-troubled runner to do?

Well, first, realize that you’re not alone — more than half of us have experienced exercise-related GI disturbances. And, second, there’s a lot you can do to prevent (best-case) and handle (worst-case) it. But it also helps to understand exactly what’s happening so you can make an informed plan of attack.

According to the Gatorade Sports Science Institute, “there are three main causes of GI symptoms: physiological (reduced blood flow to the gut), mechanical (bouncing effect of running, for example) or nutritional.”

As you exercise, the body diverts blood flow away from internal organs to support working muscles and cool the surface of your skin. Combine that with intestinal “jostling” and heavy/fatty/fiber-filled/sugary foods, and you’ve quite literally got a ticking time bomb in your gut.

Avoiding The Runs on Your Runs

Don’t want to make “that” emergency call during a long training run or veer off-course for a mid-race porta-potty pit stop? The former used to happen to me frequently, and the latter got me at mile 16 of the 2002 Chicago Marathon…sans TP; ’nuff said.

Here are my eight tried-and-true tips for taming those tummy troubles for good.

1. Develop a pre-run routine. Develop a system (mine’s coffee) to “get things moving” before you head out the door, and you’ll drastically decrease your chances of a mid-run meltdown.

2. Hydrate before, during and after. Dehydration compounds stress on the GI tract, so be kind to your colon and it may just return the favor.

3. Avoid common triggers. Things like NSAIDs, ibuprofen, sugar and fiber are known to irritate or stimulate your intestines, so refrain from ingesting ’em in advance of workouts.

4. Track your habits. Keeping tabs on what you ate and how it affected you during a run can be quite revealing! I know that quinoa, for example, leaves me doubled over…while I can eat potential triggers like dairy, beans, dried fruits, etc. with no issue.

5. Experiment with fuel type. Again, what works for a runner and his/her digestive system can vary from person to person, so take the time during training to see what agrees with you — and what doesn’t.

6. Play with fuel timing. Some people start jogging while chewing their last bite of breakfast, while I prefer to give myself a few minutes to digest before heading out the door. It may take some trial and error to find your rhythm, but it’s well worth the time.

7. Slowly increase intensity. Going too fast or too far too soon can result in GI backlash. Allow your body to acclimate to the stress of speed workouts and long runs by easing in with a warm-up and building a foundation before going all-out.

8. Whip your gut into shape. I consider probiotics my secret weapon for not just gut balance, but also overall health. After experiencing success with them over the past few years (i.e. long runs that bring joy instead of fear), I’ve been taking Sound Probiotics, which came highly recommended from my Coeur pal, Erin, who’s also an accomplished Iron(wo)man.

A little PSA: Sound’s the first probiotic engineered for the competitive athlete.

Well, during training you’re more susceptible to illness and fatigue due to the sheer amount and intensity of exercise. And since as much as 80 percent of your immunity resides in your digestive tract, I consider these little pills my insurance policy for optimizing training and recovery.

After an initial adjustment period (very mild bloating), I’ve been thrilled with the results. Not only have I been able to up my mileage without incident, but I’ve also managed to avoid all the nasty bugs circulating this season — which is especially impressive considering my daily ClassPass studio-hopping habit.

That’s a small investment for exponential results. Need more incentive? Use code KINETICFIX for 10% off if you want to try ’em yourself. 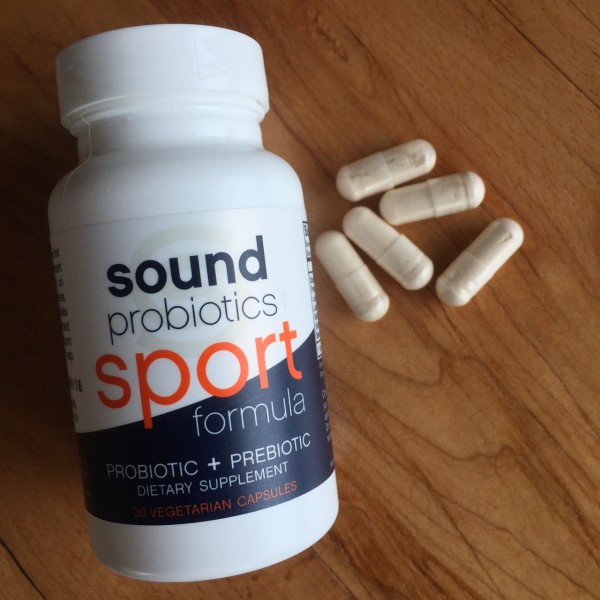 If all else fails, though, consider stashing some toilet paper and a few wet wipes in your run belt for peace of mind. Plotting routes with public restrooms also helps, but if you’re concerned it might be something more serious, consult with your doctor to check for underlying health issues.

And whatever you do, don’t underestimate the effect that soothing your gut can have your overall experience, let alone performance, during training and racing. After all, as marathon legend Bill Rogers once famously said, “More marathons are won or lost in the portable toilets than at the dinner table.”

How do you prevent those mid-run stomach rumbles?