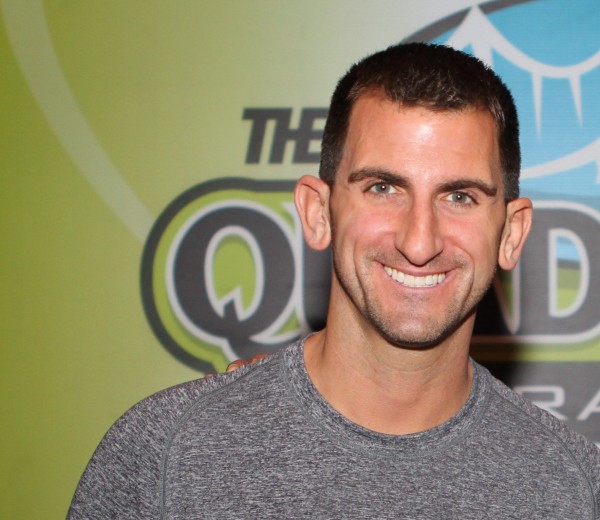 I first spoke with extreme runner, author and motivational speaker Dane Rauschenberg last year as he launched a Kickstarter campaign to create a film that tells the tale of his solo running of the 202-mile American Odyssey Relay in 50 hours.

Since then, the project has been funded and completed (watch it here), and Dane has continued to log miles, race successfully and provide witty commentary via social media, despite dealing with a few nagging injuries throughout the year.

Let’s just say that I share Dane’s pain here, so I figured it was high time to sit down again and pick his brain about our mutual passion (even if we’re both temporarily sidelined): running.

1. What’s your favorite route? Well, if you ask anyone from my time living in Salt Lake City, it is the 1.5-mile loop in Liberty Park. Situated across the street from my home, it was there I figured out (due to my love of spreadsheets and my meticulous running log) that I ran over 3000 miles around that loop in my four years of running there. I will often just use that loop as a math problem in races when the going gets tough. For example, “Only three more loops of Liberty Park and I am done.”

2. What shoes do you wear? I have been wearing Karhu shoes now for close to two years. I love not only the way the shoes work for me, but also the way the company is structured. There really is not a great deal of difference between most running shoes, so it is subtle nuances which make a shoe and its company great. Karhu does the little things right. 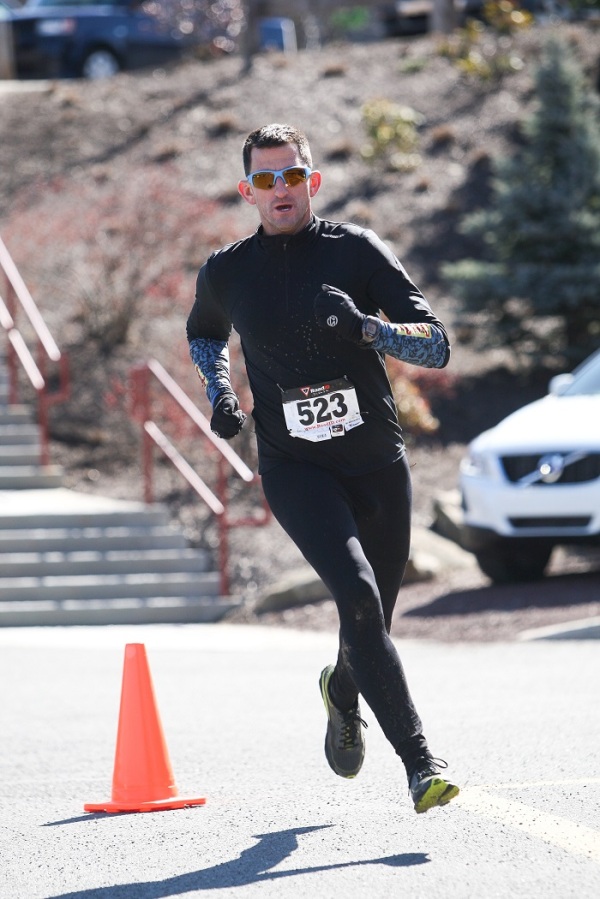 3. What other run gear can’t you live without? If I am not wearing my ROAD ID I simply feel naked. With as often as I travel to far-flung places, usually by myself, I need to know if something were to happen to me leaving me unable to respond, that the right people would be contacted to know who I am and what to do with my corpse.  (Just kidding on the corpse)

4. What’s your best time-saver or “runhack?” Not washing clothes is helpful as I don’t need to think about what to wear. Plus in races, people will stay far away from me because of runner’s funk.

In all seriousness, though, I find running routes directly from my doorstep and make sure they vary in multiple ways. Driving to run or searching for routes seems like such a waste of time. Even though I live close-ish to renowned Forest Park in Portland as well as the Columbia Gorge, I run in them very infrequently as I don’t want to spend 30 minutes in a car either way to get to where I can run. That’s an hour I could be spending do a variety of other things. 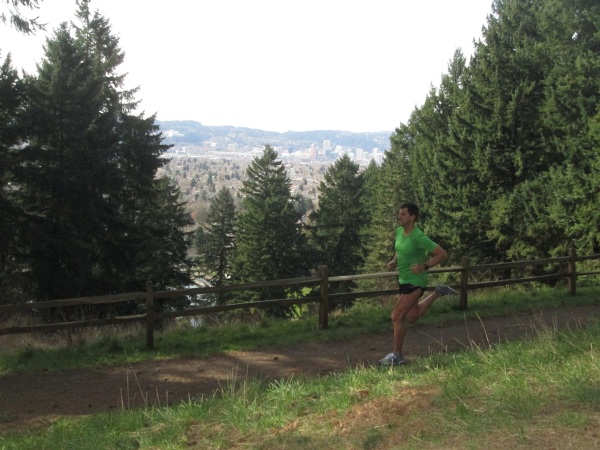 5. What running-related thing are you better at than anyone else? I doubt I am at the top of any one ladder when it comes to running. But I am extremely well-suited to look at my running history up to a point and know what I need to do in a race or a workout. I rarely have horrible days at the races because I don’t over-reach too often. If that means I tend to play it safe, then so be it.  No race is as important as my health.

6. What do you listen to while running? The tortured souls of the runners who I crush near the finish because they do not know how to pace. Oh, you mean, music? I don’t listen to music. Or I rarely listen to music. For the most part I want to hear my breathing and my heart in my ears so I can pay attention to how I am feeling. I am not a frou-frou be in touch with my inner Dane type, but I know how to respond to my body appropriately.  If I am lost in the dulcet tones of “Rumpshaker” I won’t be able to do that as effectively. 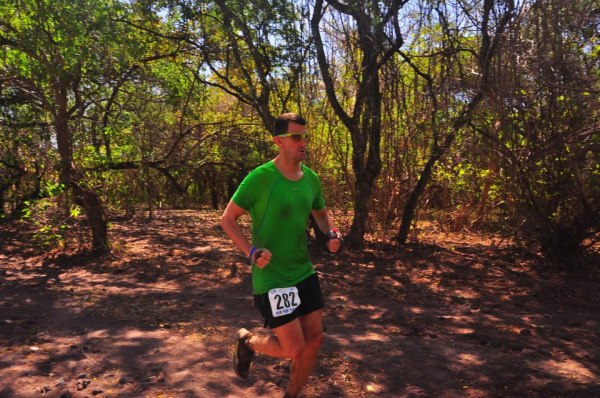 7. What are you currently training for? I have no big “Oh wow!” thing on the docket. After more than a few years pushing my boundaries (52 marathons in one year, solo running of the 202 mile American Odyssey Relay, etc.) I would like to take some time to get into really good shape for the shorter stuff. I have a ton of personal bests which are very ripe for the picking. This year was supposed to be about that for me, but a weird illness and some lingering side effects from both a bike crash in 2012 and a staph infection in 2013 shelved a lot of my plans. So I am simply picking up and starting again.

8. What are your recovery & sleep routines like? I am a night owl.  I have to constantly remind myself to go to bed before the sun rises. When you live on the West Coast this can cause lots of problems functioning with the other time zones. Given how much I hate mornings, I have no idea how I possibly get ready on race day.  But there is something about the morning of a race that just gets my engine roaring. 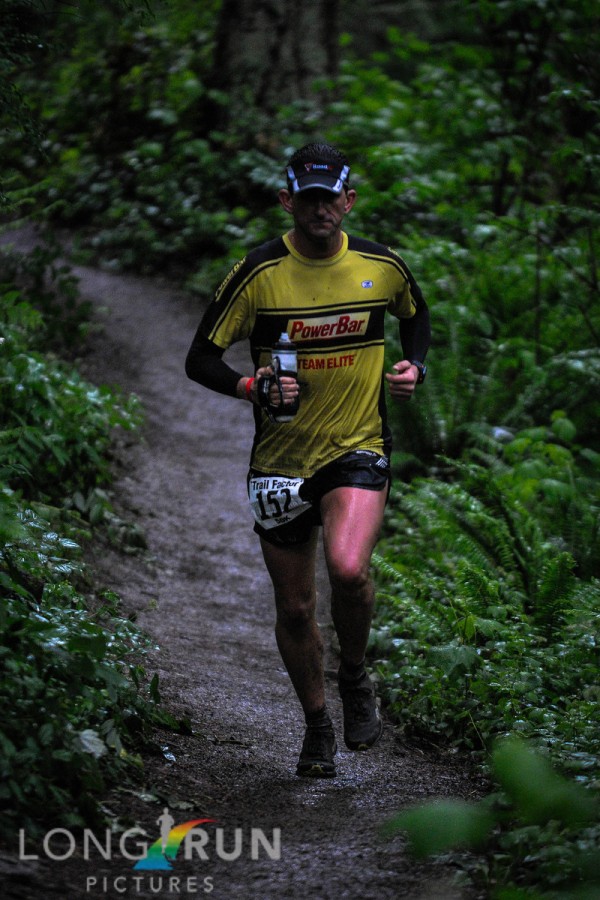 9. What’s the best running advice you’ve ever received? No one really gives a damn about how fast you run. Learn what you are good at and simply try to be the best at it. If it isn’t fast enough for someone, let that be their problem.

10. What’s your favorite running-related memory? Part of the reason I have written two books already, and am working on two more is because I have so many wonderful running memories I wish to share. My go-to answer for this would be when I inexplicably ran my first ever sub-three hour marathon in my 42nd marathon of the year in 2006. There really is no reason for me to have run a six-minute PR after 41 previous marathons, but it happened. Hard to top that memory. 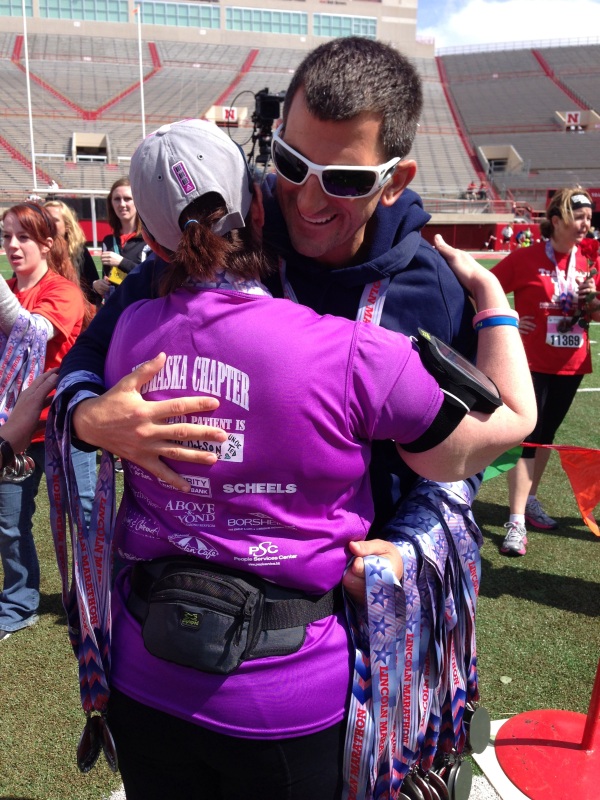 11. Fill in the blank: I’d love to go on a run with… My dad. He was crippled in a hunting accident before I was born, and we never so much as played catch. He passed away two years ago, and being able to go for a jog together would be pretty nice.

Thanks very much, Dane. I’m looking forward to hearing about your continued success in 2015!

Runner friends of all levels, please email me — info (at) kineticfix.com — if you’d like to be featured.

4 thoughts on “How I Run: Extreme Athlete & Author Dane Rauschenberg”