As I sat down to write this post yesterday, I saw that my sister had forwarded me an article from the Detroit Free Press about how a specific group is sparking the nation’s running craze. And what started off as a way to procrastinate for a few minutes to cure my writers’ block actually ended up giving me a clearer perspective on the past few days.

According to the article, Running USA recently released some interesting stats: A record-setting 19 million people finished U.S. running events last year, which is great news because it’s an increase of 300 percent since 1990. But the best part? Women made up 10.8 million, or 57 percent of participants, the highest ever.

Some other fun facts from Running USA: For the first time in 2013, 61 percent of U.S. half marathon finishers were women. Women also competed in record-high numbers in full marathon events, making up 43 percent of finishers.

So what, exactly, does this have to do with me heading down to Anaheim last week with the SweatGuru/FitApproach team to co-host the first-ever Blogfest with SweatPink? Well, there are a few insights and observations from the event that I thought were worth sharing:

That’s why I’m proud to be part of the SweatPink community, and it’s also why we wanted to be a part of the world’s largest fitness conference, IDEA World. Regardless of gender (see top photo with my buddy, Pavement Runner, who knows that real men “sweat pink”), we’re’re all for the thrill of the challenge, for looking great, but feeling even better. And we’re committed to finding our best “fit,” whatever that may be, and making it stick.

Throughout the past few days we had the chance to connect with bloggers, fit pros and healthy living mavens and exercise enthusiasts. Of course, this all began with a group fun run, which wouldn’t be complete without a few mega-selfies to document our route through downtown Disney.

Later at the convention kickoff, we heard from some pretty amazing speakers. One particular pair  — Lynne and Augie Nieto — moved the entire audience to tears with their story. Augie is the founder of Life Fitness, a leading fitness equipment company, and was diagnosed with ALS in 2005. Despite a grim prognosis, however, he’s beat the odds and since doubled his life expectancy. His wife Lynne spoke about their project, Augie’s Quest, which strives to drive awareness and raise funds for ALS research.

And after Diana Nyad was presented with the Jack LaLanne Award, she walked us through her journey of how, at age 62 and after four failed attempts, she finally conquered the 100+ mile swim Cuba to Florida, sans shark cage. She was once challenged to swim as if she couldn’t go a “fingernail’s length faster” in the pool, and it’s clear she lives her life with that very same mission, so she encouraged us to do the same.

One of BlogFest’s highlights was keynote speaker Jillian Michaels, who shared the story of her fitness journey, along with some many awesome tidbits of advice during her Q&A. Some of my favorite snippets:

Oh, and did I mention that the entire room fell in love with her? She’s not at ALL like the personality portrayed on TV; she’s hilarious, irreverent and real…and the entire room had a #girlcrush on her by the end of the hour. Including me and Bianca.

Finally, what would a fitness convention be without some amazing workouts? Thanks to Stephanie Ring (yoga), Chalene Johnson (piyo), Tara Stiles (yoga), Shauna Harrison (bootcamp) and Moe & Caroline (bootcamp), we got to break a sweat between the expo and educational sessions. Here we are doing the famous “piyo flip” with Chalene. 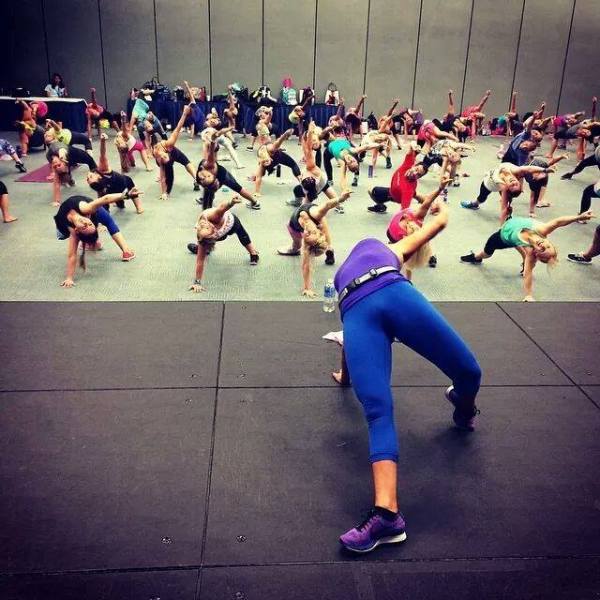 So there you have it — and incredible few days working and working out alongside some of the most passionate people in the business. We were beyond honored to be a part of it, and I hope that seeing the shots of everyone in action inspired you, as well.

I also took with me a renewed commitment to share this passion via my little corner of the Internet here at KineticFix. My hope is to not only hold myself accountable in making healthier choices and redefining my own limits, but also to challenge you to think about how you can find whatever that best “fit” is in your life, as well.

How will YOU empower yourself to live a healthier life and, in turn, inspire others?