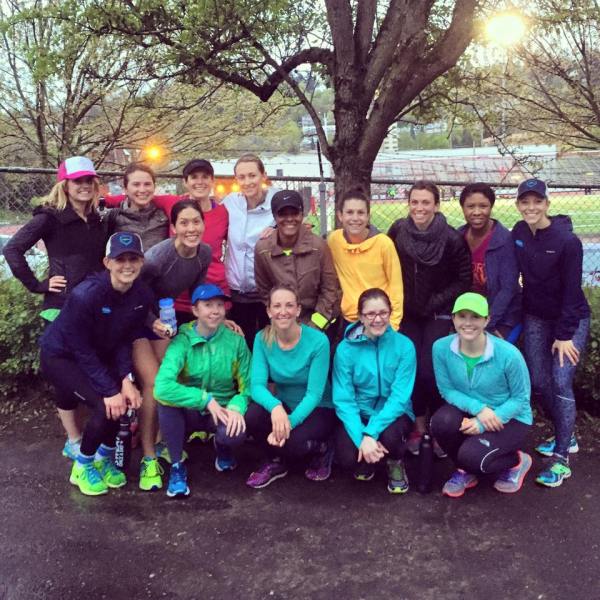 From the looks of the picture above, you’d probably guess that our very first Team LUNA Chix Portland Run workout was a smashing success and went off without a hitch, right?

In the interest of #keepingitreal, I’ll just say: A picture may be worth a thousand words, but there’s quite often a whole other story behind an image that might surprise you.

Yes, the team was out in full force, and yes, we had a fantastic turnout for our first week (thank you, guys!). But then, comically, pretty much everything that kept me up the night before hoping wouldn’t go wrong…did.

We arrived at the track just as ominous clouds rolled in and the wind began to pick up. By the time we did our paperwork and announcements, we hit the track for our much-needed warm-up because everyone was starting to shiver from the cold.

However, two laps in we politely got asked to leave because, even though there were other members of the public working out, our group was too large with the other events going on (although I’d researched the schedule extensively). Plan B was to break up into small groups by pace and do an out-and-back run, but I quickly realized that wouldn’t be a good idea with all the city traffic.

So, on the fly, we moved on to Plan C. I scrapped our dynamic stretching segment in favor of a second warm-up, which would get us off the track and over to a more “runnable” area a few blocks away.

There was a hill nearby, so we jogged over and I calculated that we had time for about 20 minutes of “repeats.” This is where the ladies would sprint up, jog or walk down and then repeat until the time was up; not necessarily what I wanted for our first workout of “easing” everyone in, but at that point we had to work with what we had available!

Luckily, these ladies are nothing if not flexible, resilient, and game for anything. They charged up the hill as I ran around snapping pictures, playing music on my iPhone and shouting words of encouragement.

And then the heavens opened up. And it started pouring.

By this point, all we could do is laugh. Normally, a run in the rain is something most of us will try to avoid, but we were out there — together — making the most of what had become a hilarious situation.

And, suddenly, it hit me — we were right where we needed to be.

I watched as all 14 women powered through the 20 minutes, and we regrouped at the top of the hill…sweaty and rain-soaked, but smiling and joking around. What started off as something precariously close to spinning out of control became a true bonding experience.

We rolled with the punches. We didn’t take ourselves too seriously. We took it all in stride.

Now, I just hope everyone comes back next week!

If you’d like to join us for an upcoming (much more well-organized) workout, check out our Facebook page for details!

We meet Monday nights are are proud to welcome women of all ages and abilities for workouts in a supportive, non-competitive environment. Come run with us!

7 thoughts on “The Best Laid Plans…”