I’m not quite sure how to start this one off, except to call it “the week that wasn’t.”

Here’s what was on the schedule:

How much of it got done? Zip. Zilch. Nada.

Well, after last weekend’s long run (a 16-miler), I felt pretty good. Yes, the calf/shin “tweak” was still there, but I seemed to warm up out of it a few miles in and was able to run with minimal discomfort.

Monday morning, though, I awoke with the same lingering pain; only this time it was more of a constant dull ache. At this point, I knew that it wasn’t getting better and I was probably only going to make it worse if I kept hammering away at it, so Hubby and I swam and biked instead.

Early Tuesday morning I set out for the track, determined to try to get back on track with my workouts, but a block away from my apartment I stopped, turned around and walked home. No, the pain wasn’t any different or worse, but I just knew in my gut that something wasn’t right. From years of running — and subsequent injuries! — I was fairly certain that this wasn’t a passing sore muscle.

Yesterday I was finally able to get in to see a professional and get some answers. I found a place that specializes in runners and triathletes (and therefore knows our quirks – i.e. me calling obsessively every day this week to see if someone cancelled and I could get in earlier to see what was up), and the PT there is amazing. She was my favorite kind of medical professional — straightforward, to the point and totally knows her stuff.

So after a series of evaluations, exercises, pokes and prods, she diagnosed me with a locked-up right midfoot (I’m not able to properly pronate through the joints), which most likely has contributed to my lingering case of plantar fasciitis (aha!) and most recently caused the acute “stress response” near my tibia. More culprits? Weak glutes, hips and core muscles — all of which are being “lazy” and throwing everything else off (oops).

The good news? It’s not a stress fracture (yet); I caught it just in time. The bad news? No running for likely two weeks (maybe more), which totally throws a wrench into my training plans. Although she said that if I’m conservative with my activity and do my homework exercises to strengthen my glutes, hips and core in the meantime, I should be able to get stronger in month and can likely run my marathon in October — although the PR part may be questionable.

Because running is off the table for the immediate future, I’ll be re-acquainting myself with the pool, the bike…and this fellow, my cross-training nemesis: the elliptical. It used to be one of my main forms of cardio during college (with a magazine, no less!), but since then it’s something that’s been reserved for injuries and off days. 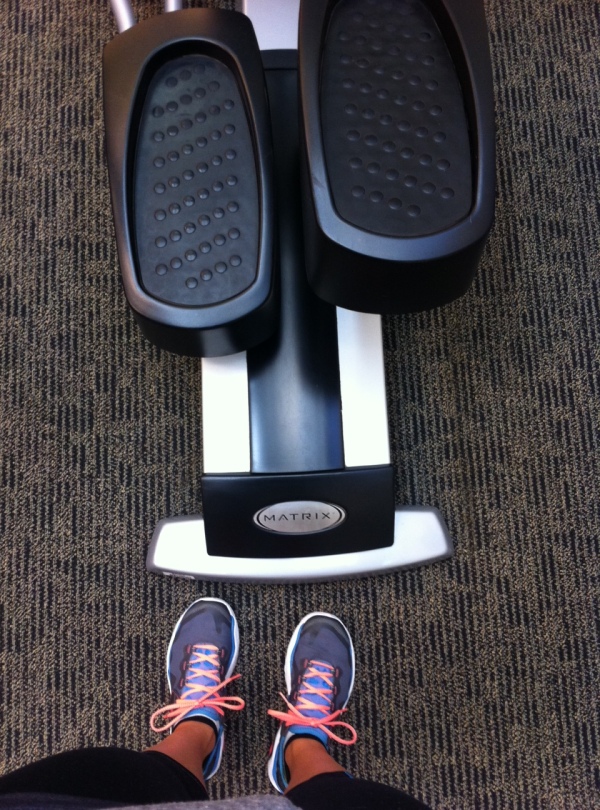 Emotionally, I did give myself a few days to mope around; it’s usually easy to adjust to these things physically — but it’s the mental part that’s the most difficult. Adjusting your course when you’ve been going full-throttle in one direction toward a goal can be tough, and I’d be lying if I said I wasn’t disappointed. But now that I’ve had a chance to process things, I’m picking myself up and getting ready to attack this next phase of training with the same dedication as my previous one.

The lesson here: Being injured isn’t an excuse to throw up your hands and quit. It doesn’t mean you’ll never reach your goal; you’ve just got to figure out an alternate route to get there. It’s an opportunity to work on your weaknesses, get stronger and come back healthier. And it’s about a long-term plan, versus a short-term focus.

The other lesson? Get yourself checked out by a professional sooner rather than later, people! I am kicking myself that I didn’t go to see someone about my plantar fasciitis earlier because we might have been able to recognize the underlying issue and address it earlier. But hindsight is 20-20, and I’m thankful that I found someone who is helping me address it now so I can be a smarter, stronger and more efficient runner in the future.

Onward and upward to week 13 — let’s hope it’s a luckier one!