It’s a good thing typing only requires moving my fingers — because pretty much every other muscle in my body is sore today after yesterday’s field trip down to LA for my first taste of the serious sweatfest that is Barry’s Bootcamp.

The Los Angeles-based company, whose popular program combines treadmill sprints and strength-training intervals for hour-long workouts, is coming soon to San Francisco thanks to Adam Shane (owner of the SF franchise). He invited a group of us to see firsthand how the brand earned its reputation as the “Best Workout in the World” among celebs, athletes and enthusiasts alike.

Among our travel crew were a few of the new Barry’s SF instructors, who just so happen to boast beauty, brawn and brains (we’re talkin’ Ivy league-educated, PhD-toting fit pros here), which is very much by design. Shane hand-picked the team himself, selecting some of the city’s top trainers with a goal of whipping the Bay Area into shape like never before.

On the day’s agenda? A double-whammy workout with not one, but two (!) Barry’s classes — some morning madness at the Sherman Oaks location with master instructor Martin George, and some afternoon abuse with ‘entertrainer’ extraordinaire Seth Gee.

By the way, get to know these faces — Barry’s SF instructors Tommy, Erica and Tommy — because you’re going to develop a love/hate relationship with them when they kick your ass in class come this spring.

Back to the workout: Each class is split between high-intensity treadmill cardio and weight lifting moves on the floor. But the real kicker is that the instructors switch it up every time, so you never know what to expect — and neither does your body, which is what makes these moves more effective that some other super-repetitive routines.

Thursday was ‘core’ day, so George told us to grab a few dumbbells and take to the makeshift step stations for a series of crunches, lifts, twists and other forms of abdominal torture. All I know is that I was seriously struggling — and that every bit of my midsection got worked to submission.

And just when I thought I may have to wave my white towel in defeat, we swapped placed with the treadmill group.

I relaxed a bit as I cranked up the speed — after all, I’m a runner, and the treadmill is my ‘security blanket’ — but after a series of sprints, hills and backwards drills (on a 12 percent incline, no less), it sunk in that there would be no room for slacking off, zoning out or taking a breather during class.

George seamlessly struck a balance between monitoring both groups, shouting out intervals to the runners and counting down sets on the floor, plus orchestrating music and lighting changes while simultaneously giving feedback on form.

We swapped places twice more for a total of three different treadmill segments and three floor sessions each, and before we knew it the class was coming to an end. We did a quick cooldown stretch and promptly collapsed outside in the sun for a few moments to recover and figure out how we were going to make it through another hour of this kind of intensity later in the afternoon.

After a quick snack (it’s important to refuel within 30 minutes after class to help your body recover and repair) and change of clothes, we headed down the street for lunch and to meet with company CEO John Mumford and President/Founder Rachel Mumford to learn a bit about how Barry’s came about.

The story’s a great one — Mumford recognized the potential in developing Barry’s Bootcamp’s program and lifestyle into a recognizable brand after religiously taking bootcamp classes from Director of Curriculum/Founder Barry Jay years ago. She convinced her husband to invest initially, and then eventually take on business operations and strategic planning — and the rest, as they say is history.

After a little time to digest (apparently if you puke mid-class, you get a t-shirt; no thanks), we headed over to West Hollywood to the original Barry’s Bootcamp location for our afternoon class with Gee. I was concerned the session might be a bit repetitive due to the same cardio/core focus as our morning workout, but Gee immediately had us grab a weighted ball and set the treadmills to dynamic mode (you’ve got to propel the belt yourself)…there’s no such thing as the same two workouts here.

Although we followed a similar class structure — three sets on the treadmill and three sets on the floor — the exercises, intervals and overall feel of the session were completely different. In between ‘sprints’ where we ran with all our might on a non-powered treadmill, we did kettleball-type swings, dead lifts and a bunch of Russian twists — but no single exercise on the floor or segment on the treadmill was repeated from the morning’s workout. 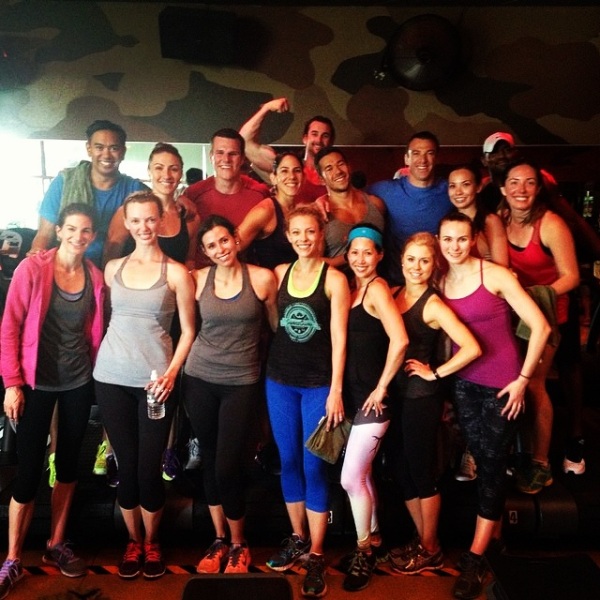 Don’t let those grins fool you — we were happy, but certainly hurting, after a double dose of Barry’s. In fact, after a ride back to the airport and a quick dinner together, most of us looked like this on the plan ride home: Exhausted! 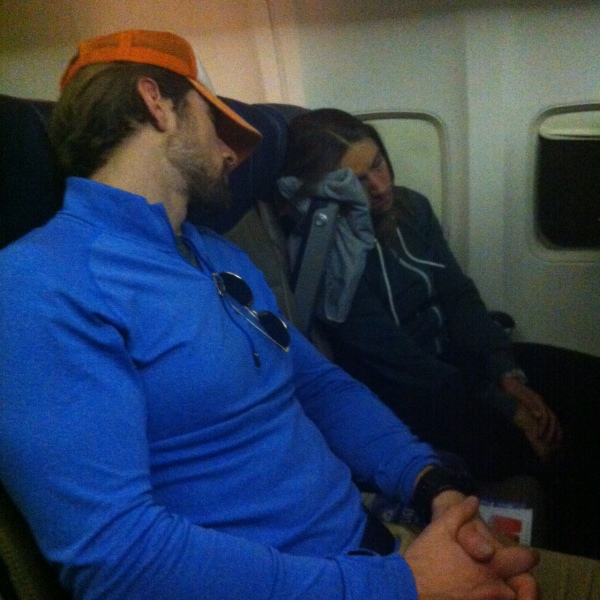 My takeaways from the day?

It’s a serious workout. Don’t expect to waltz your way through class; although the moves are modifiable, you’ve got to bring your A-game. At more than one point, as I was struggling for just. one. more. rep, I looked around and saw that everyone else around me was hurting just as badly (yes, even the biggest, buffest guys!).

It really works. Not only does the body part focus change each day, but the individual instructors have their own respective styles and moves. You might swap back and forth from floor to treadmill all workout or you might have a 30-on/30-off day, so your body and mind are constantly working to adapt.

It’s ideal cross-training for athletes. As I was telling Shane on the plane ride home, I’ve been slacking on my strength training, core work and interval training in my quest for pure mileage on the bike, in the pool and on the road during training season. So this is an awesome way to mix things up and train away any weaknesses in between — not to mention a great way to maintain fitness during the off season.

It’s damn fun. Between the instructors, lighting and music, the mood in the room is amazing. Very no-nonsense — you’re gonna get a hardcore workout — but you’re not gonna get yelled at or intimidated. You can focus on beating your personal best, or motivate yourself by trying to keep up with the person next to you…but either way, the time will fly by and you’ll be wanting to come back for more.

For more information on Barry’s Bootcamp, check out their website here. And stay tuned, Bay Area friends, for the opening of the new SF location this spring!

6 thoughts on “Barry’s or Bust: Taking to LA to test the ‘Best Workout in the World’”