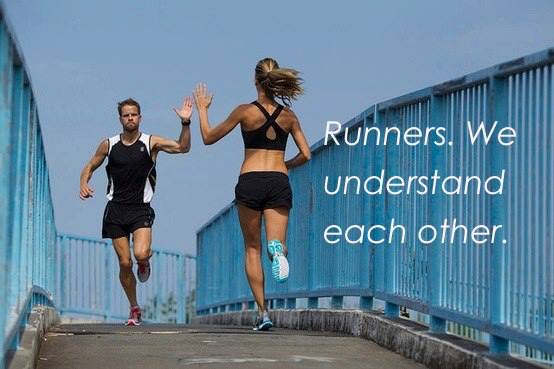 “Since you get more joy out of giving joy to others, you should put a good deal of thought into the happiness that you are able to give.” – Eleanor Roosevelt

To wave or not to wave? That is the question.

This is a topic I’ve been wanting to explore for quite some time — not only because I find the social dynamics of the dilemma fascinating, but also because I’ve seen geography come into play during my time living (and running) around the country.

Growing up in the Midwest, it was customary to greet everyone with a smile and a wave, nod or some other form of friendly acknowledgement. But it wasn’t until I moved to Boston for grad school that my advances made in passing were met with an utter lack of response from fellow joggers along the Charles River.

At first I took it personally. I’d go out of my way to try to catch someone’s eye and say hello. But then, not wanting to infringe on what was potentially their personal meditative time, I backed off and would cautiously wait for some kind of signal before making my move.

California was a mixed bag; I’m assuming because there are so many transplants in the Bay Area that a runner’s propensity toward waving is entirely dependent on where he or she claims roots. In the ‘burbs (where we lived for seven of our 10 Golden State years), it was much more common than in the city; I attribute that mostly to the hills, though, which made made breathing (let alone any other type of exertion) increasingly difficult.

But now that we’re living in Oregon — the “Midwest of the West Coast,” as I like to call it — I’m determined to re-incorporate the wave into my running routine. That’s right; as a staunch pro-waver, I’m officially campaigning to make the mid-run wave a show of solidarity.

Why? Well, as this Runner’s World article states, it’s first and foremost about acknowledging the presence of a fellow human being who clearly shares an affinity for the sport.

It’s also a mutual acknowledgement that you’re both out there, putting in work. It’s an unspoken conversation about the gorgeous scenery or change in seasons. It’s a show of empathy for some particularly tough terrain or crappy weather.

But it’s also as simple and paying it forward with a small gesture that has larger meaning.

Case in point: Just the other day, I overheard a gentleman in my apartment building lobby practicing his Spanish. I held the front door for him as we were leaving, and he said, “Gracias!”

“De nada,” I responded with a smile. To which he nodded, laughed and said, “Have a blessed day!”

It was a 15-second exchange, but I like to think we both went about our mornings with a little bit brighter outlook on the day.

The same goes for the runner’s wave: It’s not about disrupting someone’s train of thought or derailing a workout; it’s about creating more camaraderie in a sport that’s often a solitary endeavor.

So if you see me out there on the roads, the track or the trails, you know what to expect and what I’ll be looking for in return. Now, who’s with me??

To wave or not to wave — what’s your take?

This is a re-post of my latest Huffington Post article, which went live yesterday.