As a fitting follow-up to last weekend’s ‘ride of firsts,’ today was a ‘run of firsts’ at the Chabot Trail Run in Castro Valley, Calif.: First longer trail race, and first 30K distance in the books! And as I sat recovering on the couch and sorting out the day’s events, I decided it’d be best described as equal parts exhilarating adventure and happy coincidence.

But, to back up for a moment…Vivi, my running partner in craziness crime, and I signed up for the event on a whim (although she did talk me down from the 50K, thank goodness), thinking it’d not only be a nice change of scenery, but also a good way to give our legs a rest from the roads, as well as a perfect proving ground race to test our trail mettle.

We arrived to the start area about 45 minutes before the 8:30 a.m. gun time and managed to snag the last parking spot (good race karma, we decided) before picking up our packets, hitting the bathroom and swinging back by the car to drop our sweats.

By the time we did all that, we could hear the race organizers lining people up, so we jogged over to the start. 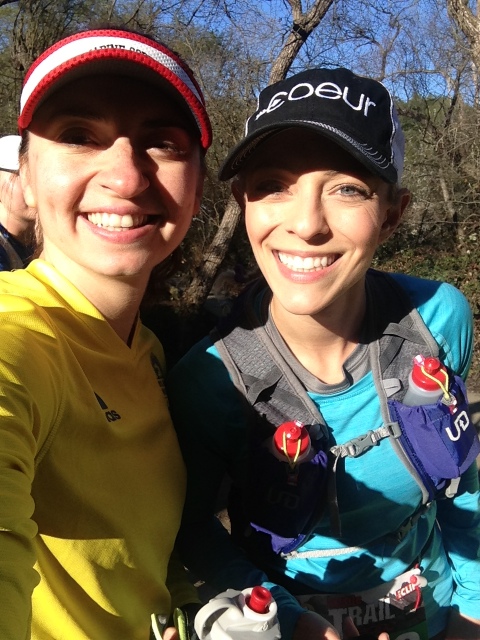 After giving a few last-minute instructions, the event director started the final countdown, and we were off!

The first mile or two was on paved roads around the lake, so we eased in at a conservative 9:00-mile pace. Then the pavement gave way to dirt and we got onto the good stuff…a bouncy footbridge followed by soft trail.

Now, about that happy coincidence: Vivi had put out a call on Facebook the previous evening to our November Project friends about the race, letting them know we’d be running and inviting them to join in to pace us or cheer us along.

We figured it might be too last-minute to have anyone take us up, but a little ways into the run we heard someone come up behind us and say, “Are you Jen and Vivi?” 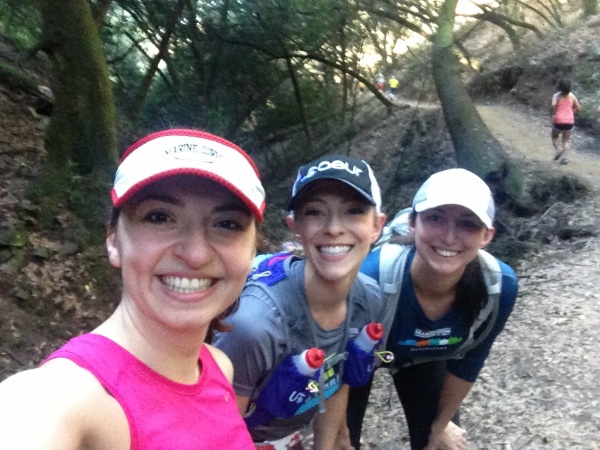 Enter Molly, whom I nicknamed my Race Angel for the day! She’s training for the Boston Marathon and had a 19-miler on the schedule for the weekend, so she figured she’d kill two birds with one stone and grab some miles while gabbing with some fellow runner gals.

In yet another testament to the amazing running community, we all immediately started chatting like old pals…and the miles flew by because we were so immersed in conversation.

Before we knew it, we had tackled the first of four major climbs (walking the steep parts because I wanted to heed my ultrarunner friend Jamie’s advice to conserve energy) and hit the first aid station.

And, wow. They should call these mini-buffets instead of aid stations. It was like a mirage in the desert, such an amazing spread with all kinds of items, both healthy and not-so-healthy. Huge kudos to Inside Trail Racing for really taking care of us runners.

With my sweet tooth, I thought I would have to restrain myself around all the candy, but I actually wasn’t craving it at ALL. In all my pre-race hydration focus, I ended up making a rookie nutrition mistake (more on that later), so I grabbed a PB&J sandwich square to stay on the safe side.

And then we were off again! 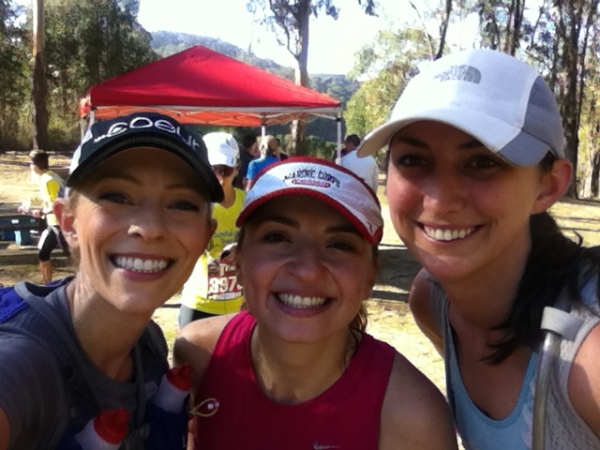 Over the next few miles we met up with a super-nice woman named Leslie — a mom in her 50’s who had taken up ultra-running and was doing the 50K as a wait to train for her upcoming 50-miler.

That’s the great part about these longer distances; not only are they so much less crowded that road races, but you can run alongside people at a slower pace and actually have some great conversations along the way.

I think (hope?) people enjoyed running with us, as well. We were having such a great time being out there, laughing and taking it all in, that we must have served as some interesting on-course entertainment!

Despite the intermittent climbs, our spirits stayed high as we alternated jogging on the flats and small rolling hills with walking up the steeper areas.

I also tried to stay on top of my hydration and fueling, which was Leslie’s main advice, taking sips of Osmo Nutrition Active Hydration and nips off my PocketFuel every mile or so. 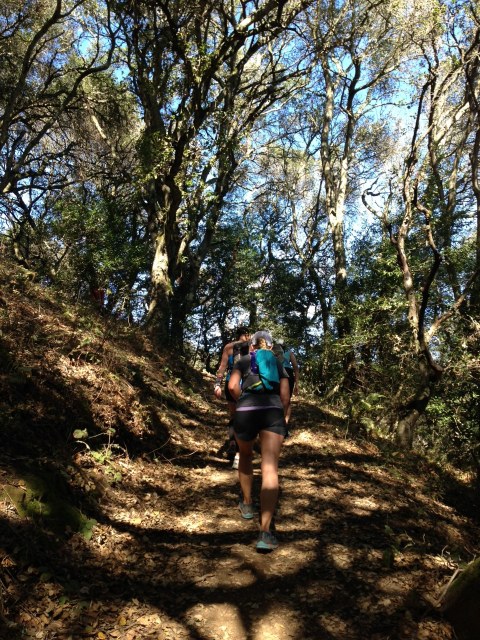 After we had done another four miles (~10 total), we came upon the second aid station. By this time, my stomach was starting to feel a little grumbly (Note to self: My big mistake was to eat salad for lunch the day before the race – never again, as it didn’t set well).

I tried a combo of boiled potatoes dipped in salt, along with a Dixie cup of Pepsi, which helped. And then we were off again!

The third and final aid station before the finish was about four miles away (~mile 14), and we were still feeling pretty strong at this point. So strong, in fact, that a fellow runner commented on how upbeat we seemed as we hiked up a steep hill.

She identified herself as a triathlete by training, and said that her half Ironman races were much easier than the 30K distance, which made me very happy to hear in light of my upcoming April Olympic distance!

We made good time to the final aid station, and I grabbed more Pepsi and salted potatoes, filling the flasks in my Ultimate Direction Jenny Ultra Vesta (ok, I may have gotten it for the name, but it’s such a handy and comfy vest for long runs) with water mixed with the Tailwind electrolyte drink that they had on the course.

By this time, we were out of the wooded areas and running in full sun, along dirt paths through some really beautiful scenery (another benefit of trail events).

We kept commenting on how lucky we were to have such good weather, too — it was a perfect 65 degrees.

About 15 miles in, I remember telling Vivi and Molly that I couldn’t believe how good I felt.

Admittedly, we were undertrained for the race — I was hoping to get 14-15 miles the weekend we attempted the Double Dipsea last month, but the weather never cooperated, and we called it a day at 10. So we were attempting 18+ miles, having completed only a 12-mile “long” training run in advance of the race. 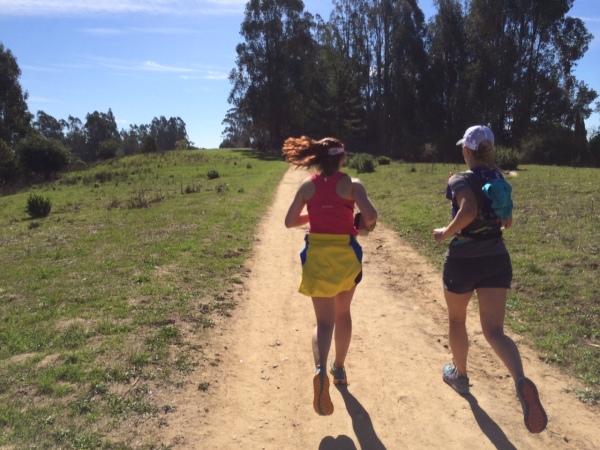 Well, apparently I provoked the running gods by saying that — and it turns out they’ve got a wicked sense of humor. No sooner did I utter those words than the wheels started slowly coming off, and thus began a gradual unraveling over the next few miles.

I forced myself to keep sipping and eating small amounts, but every incline got tougher as the accumulated climbing of the day started to take its toll. Our solution? A few photo opps as we made our way slowly toward the finish (i.e. chances to rest for a minute, catch our breaths and bring our heart rates down).

With a mix of jogging down straightaways and walking up inclines, we slowly ticked off another mile and saw a sign that indicated we were a mile away from the finish. Heartened, we picked up the pace to bring it home. But at the end of that mile, when the finish line was nowhere in sight, I hit the mental wall.

We figured we couldn’t have more than another mile, and Vivi got her second wind, so she ran ahead while Molly hung back and kept me distracted enough to keep going despite my rebelling mind and body.

When we turned the final corner, saw the finish line and noticed that the clock was under 3:30 (Vivi and I were thinking we’d aim for under 4:00, but would thrilled with 3:30), it was enough to give us that final boost to get across the finish. Final time: 3:23:21.

And then the feasting began! 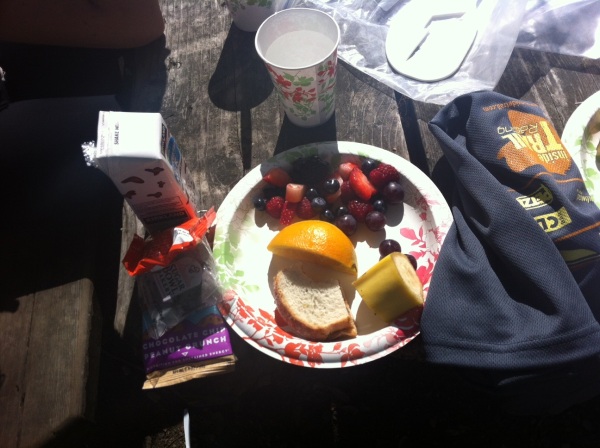 On the way out of the park, we ran into a woman who races with her Dachshund. He had completed the half marathon today, and he’s training for his first marathon later this year — so, of course, we had to get a shot with the impressive little guy and his bib (yes, he was officially registered for the race).

Leslie (our new ultra hero from the race) had also mentioned that it was her rule to make a new friend during every event — so between her, Molly and our new four-legged mascot, we not only met but happily exceeded that goal for the day!

This furry fellow was also enjoying himself today, catching some rays and taking in the views from the sunroof.

There certainly is something to be said for taking on another round of firsts. You never know where it’ll take you — and who you’ll meet along the way.