Usually I try to go into races with a solid game plan: I’ve got a decent idea as to what my level of fitness and current comfortable pace will allow, and from there comes the “awesome,” “good” and “just-finish” time targets.

But as I lined up this morning at the inaugural Berkeley Half Marathon, I was still vacillating between trying for a PR and just running it for fun. Same course, same distance, two very different mindsets. 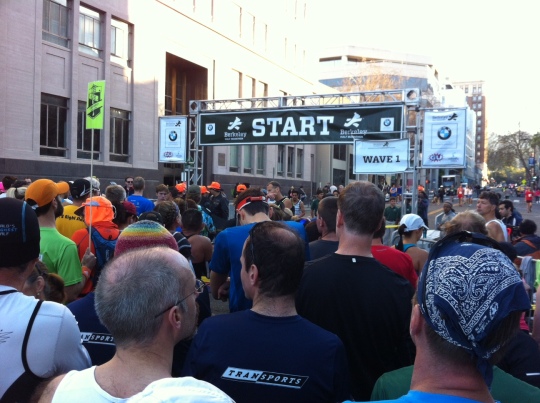 Lining up for the start

Being a little more than a month out from the Nike Women’s Marathon, my inclination was to try to take advantage of some of the accumulated endurance, but I’ve been dealing with a sore tendon in my foot, as well as some other minor aches and pains…probably from not taking my own advice and running too hard too soon during marathon recovery (I know, tsk tsk).

Ultimately, I decided to play it by ear. The game plan was that there was no game plan, and I’d simply “run by feel.” Coach Jenny Hadfield is a huge proponent of this (read her article on it here). Get out of your head, listen to your body, and you just may be pleasantly surprised, she says. 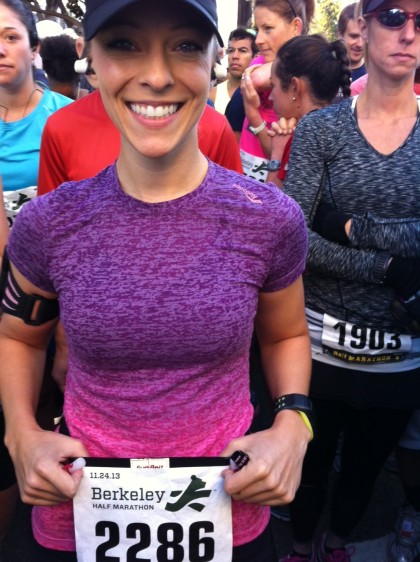 Waiting for the race to start

Turns out, it works. Granted a net downhill course, good weather and a number of other factors help, as well…but I PR’d with an unofficial time of 1:47:07 despite not having a pace band, aiming for specific splits or knowing where I was time-wise at each mile.

Here’s how it played out: I broke the race into four 5K’s and tackled each one separately. Of course, if I wasn’t feeling it, I’d have moseyed along, and this post would have been filled with a lot more pictures! But since I was able to get into a groove, the first 5K was warming up and settling into a comfortable pace. The second, third and fourth 5Ks were then about trying to maintain an even pace before giving it whatever was left in the tank for the last mile. 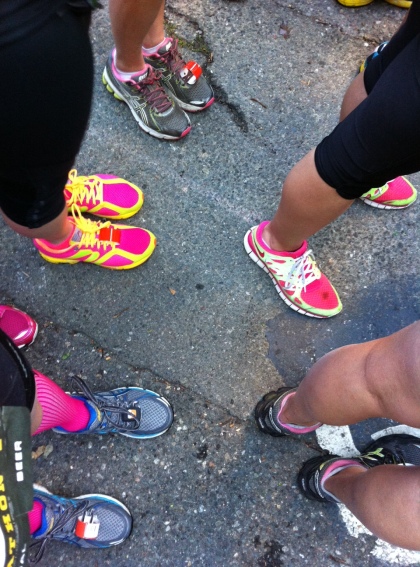 Couldn’t resist snapping a shot of all the colorful shoes!

Out of the gate, I came out fast, but there was a big downhill slope during the first few miles that I wanted to take advantage of. Once we hit the Berkeley Marina, the course was pretty flat, aside from some small hills and sections of rough road and gravel, so I just focused on keeping a strong stride.

Everything was smooth until mile 12 when I started getting super nauseous (Note to self: I think I’ve got to switch to gels instead of chews for distances of 13.1 and under), so it was a fight between trying to push hard and trying to keep my breakfast in my stomach. Throw in a monster hill at mile 12.5, which I briefly considered walking, and it was a tough final stretch, but I’m super happy with the results (and motivated for the next goal – 1:45!). 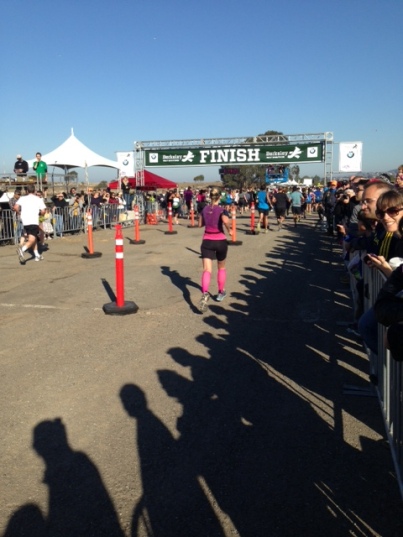 And since it was the inaugural race, I’ve got some feedback  and constructive criticism for organizers:

Cons: Small expo (albeit I went to the early pick-up at Sports Basement, but there wasn’t much there), I didn’t see a marker at Mile 1, no time clocks at mile markers, rough patches and gravel stretches along parts of the course, crowded last mile where all distances converged and ran around the Golden Gate Fields parking lot = clusterfest, ginormous hill at mile 12.5, point-to-point course (versus start/finish at same location). 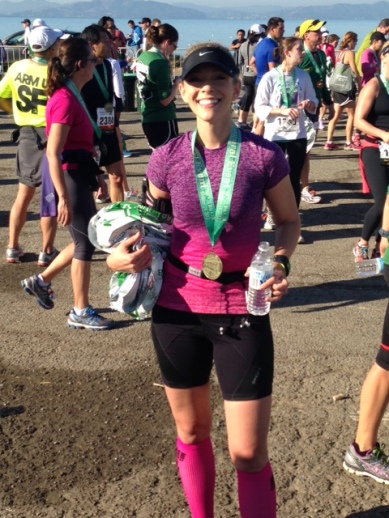 Overall, though, it was an excellent race, and I’ll definitely be back…although maybe next time I’ll have a more specific goal in mind now that I have a handle on the course and the flow of the race.

Huge congrats to all my Bay Area blogging friends who ran today, too. We were out in full force!

And one more note – I’m thrilled to be featured in the “Runner Spotlight” on RoadRunnerGirl today; check out the post here to read my Q&A, and thanks to Mindy for the opportunity!