“I still bother with runners I call hamburgers. They’re never going to run any record times, but they can always fulfill their own potential.”

This “hamburger runner” just marked the halfway point of training, and I’m taking a moment to celebrate!

So here’s what was supposed to happen during week eight:

But after this happened the previous weekend, I decided to downgrade Tuesday’s 10-miler to, er, a much more palatable three-miler.

Karaoke ’til 1am after a 17-miler? Not such a smart recovery move

While I don’t usually like deviating from the training plan, there are some times where it’s just better to listen to your body and dial back. The last thing I’d want to do is miss a long weekend run because I pushed myself to the point of sickness or injury after not allowing my body to properly recover.

I did hit the barn, though, on Tuesday night for a riding lesson. Mental recovery is just as important as physical, and it’s impossible not relax amid the rolling hills and beautiful scenery of the East Bay.

After spending a few days catching up on sleep and focusing on nutrition, I felt like I got back in the groove in time for Thursday’s track workout.

The goal was three 1600s in the 7:40-7:45 range. Even though all three were under the target time, my first was a bit fast (7:23), and then the next two slowed down significantly (7:31 and 7:42, respectively), which means I need to work on starting off slower for more consistent pacing.

But before I knew it, it was time to gear up for another Saturday long run. I plotted out a 13-mile route along the Marina and Embarcadro that cut back through the city on Market Street before weaving alongside Golden Gate Park.

The objective? To try to avoid as many hills as possible! 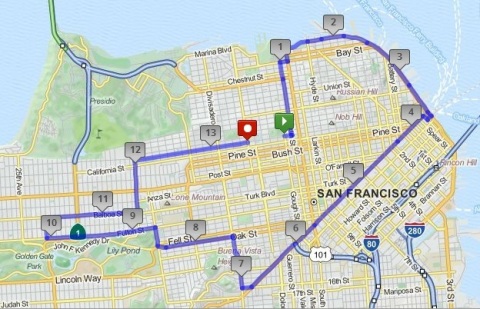 Since it was a “shorter” (well, relatively) run and a recovery week, I went solo so I could go nice and slow and take in the scenery, like the swimmers doing their early morning laps by the ships docked in the marina. 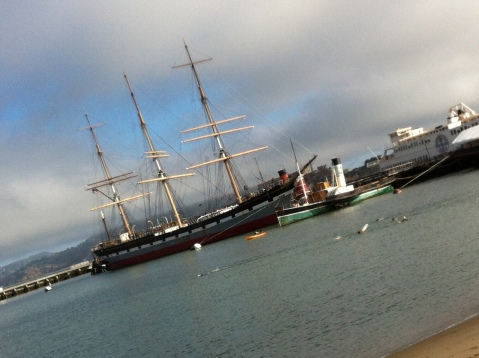 Popular spot for an open-water swim

Or the farmer’s market over at the Ferry Building, which is widely known as one of the best in the country for fresh farm products and artisan foods. It’s also one of the busiest with almost 25,000 visitors per week!

Tempting not to stop for a snack…

And as I was jogging toward the Bay Bridge the Oracle boat swung around the corner, headed to the day’s America’s Cup races. Many of us stopped in our tracks along the path to watch it quickly glide by.

Up to that point, the run was going well. I felt strong, albeit a bit slow. But as the miles began to add up, I could feel last week’s lack of recovery catching up to me again.

I met up with Ben with about four miles to go and powered on, alternating Sharkies and Vega gels to try to maintain energy for the home stretch. 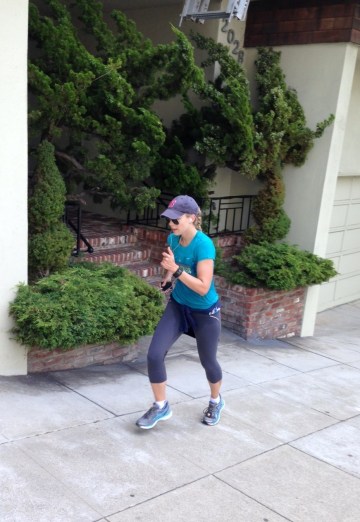 This random discarded mattress set on the sidewalk was definitely calling to me as we passed it with about a mile to go, but there was no rest for the weary!

Final time? Slower than what I had hoped for, but I was just happy to have finished – especially because I felt like I was getting super dehydrated toward the end.

Note to self: Bring a hydration pack on runs longer than 12 miles from now on; and while I’m at it, I could probably up my overall water intake to better match my activity level.

As you can see, these recovery weeks are about taking a step back so you can take two forward in the next training phase, so I’m trying to adjust as I go and keep reaching for my personal potential, as Coach Bowerman stated above.

Besides, next week’s long run is an 18-miler, so it’s time to start getting psyched up for another mental – and physical – milestone. 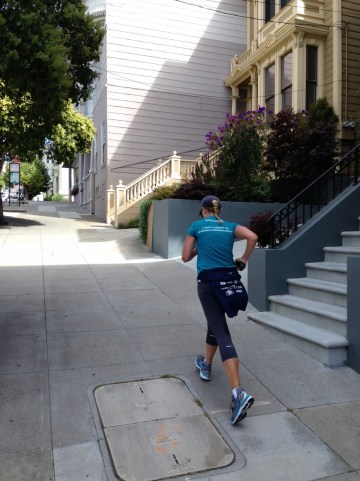 Thanks to everyone for the words of encouragement; I really appreciate it and love your comments, so please keep ’em coming. Onward to week nine!