Have you ever heard the saying, “the days are long, but the years are short” to describe the passage of time?

Well, now that we’re already more than a third of the way through training, I’d say it also rings true for running: “The runs are long, but the weeks are short.” I can’t believe race day is a little over two months away!

The upside so far? I’ve gotten into a great workout rhythm, thanks to a manageable three-times-a-week run plan.

The downside? More often than not, our apartment looks like it got hit with some kind of running gear tornado as I experiment with new clothing, supplements and accessories for race day (but more on that later).

Here’s what was on deck for week six:

I learned that there’s a nice side effect of long weekend mileage: Tuesday’s tempo runs seem short in comparison!

Since my legs were feeling a little heavy from last week’s long run, I ran over to Golden Gate Park to distract myself with a change of scenery.

Oddly enough, I haven’t spent much time exploring here for having lived in the Bay Area for almost a decade now, so it’s nice to make up for some lost time.

Not only is it peaceful on the paths, but it’s also pretty much the perfect way to escape from being surrounded by concrete in the city.

By Thursday my legs had bounced back, so I was champing at the bit for some speedwork.

This was the first time I tried 1200s on the track (last time was an estimate along the Portland waterfront), so I was interested to see how my pacing would go.

Despite having to keep ducking from pigeons (I think the little buggers got a kick out of buzzing us runners with several whole-flock flybys), my pace stayed between 5:27-5:34, which was slightly faster than the 5:42-5:45 target.

Normally, I’d try to back off and maintain the goal pace, but I was feeling good, so why not reach for more? Learning to run through some discomfort will only help come race day. 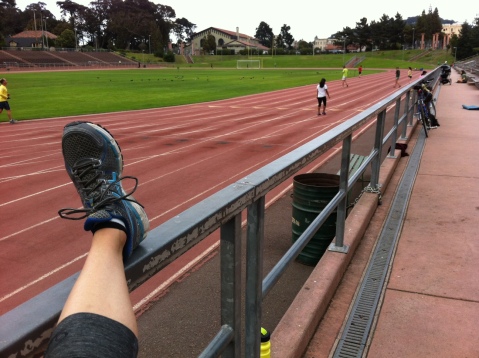 Speaking of discomfort… Gearing up for weekend long runs is starting to require more and more motivation under the mounting mileage.

Here’s how the conversations (i.e. me pleading) with friends usually go:

Me: “Hey, wanna join me on a long run this weekend?”

Them: “Sure, I’d love to grab a workout! How far are you going?”

Me: “Miles. But it’ll be fun! you don’t have to even run the whole way. You can just hop in a for a few miles. Hello? Wait… Why are you walking away?”

So, needless to say, I was excited when fellow Bay Area endurance runner and blogger buddy Brian Kelley of Pavement Runner tweeted me to see if I’d like to join him for an early-morning eight-miler.

I’m not sure if it was the great company and conversation – or the fact that I wasn’t completely awake yet – but we were done with eight-plus miles before we knew it. Gotta love that!

As it turns out, our run was just Brian’s warm-up (he was meeting a group for another eight-miler afterward; I may work up the guts – and speed! – to join them eventually), so Ben came out to do the balance of my miles with me to finish closer to home.

The good news is that I felt awesome and was keeping a steady pace…until about 12 miles in.

The not-so-good news is that there was no flat route home, so the hills totally killed my hamstrings and wiped out what little energy I had left.

No, that’s not me barfing, but I did need to bend over to catch my breath and “stretch” a few times around the 14-mile mark.

But on that note: Friday night must have been a crazy one in San Francisco because I passed by no fewer than five piles of vomit on the sidewalk along my route that day. Gross!

Sidewalks plastered with the previous evening’s stomach contents aside, I made good time overall and was done with the 15 miles before 9:00 a.m., thanks to Brian and Ben.

It was a great reminder that, while running’s not usually considered a team sport, a team mentality can be a really powerful part of the experience.

(And, bonus – I found a favorite new running tight, the Relay Capri ($69) from Athleta, which I bought as an impulse bribe for myself, but fell in love with on my long run…check it out, if you’re in the market for something cute and functional that’s not outrageously-priced.)